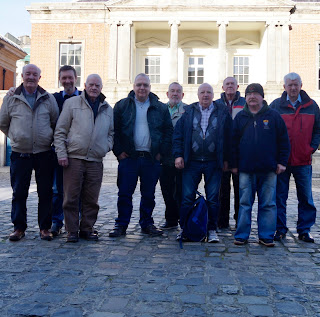 On the 25th of January this year I accompanied the Fair hill Men's Art group to Dublin Castle to see the 'Crawford at the Castle' exhibition. The Fair hill men's Art group are a men's group I teach painting to every Wednesday in Bride Valley Park, Fair Hill on the north side of Cork city. The Art group usually has an outing once every couple of months. After receiving an invitation by Anne Bobaart a  Curator at the Crawford and  co -curator of this show we took the opportunity to travel to Dublin for a day trip. Compliments to Jenny at Dublin castle for a free tour of the castle and a book about the show. We were given a great tour by are tour guide Elizabeth(from Killarney) of the castle
grounds. 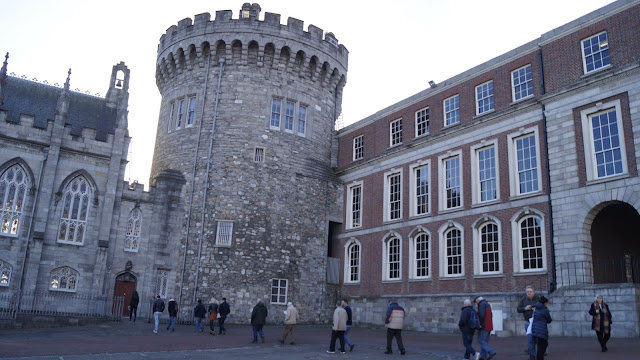 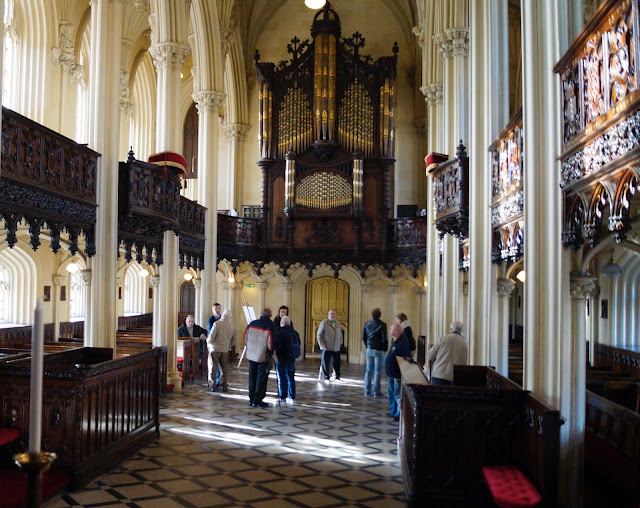 The men were inspired by the interior wood carving in the cathedral which we learned was made by local Irish craftsmen, the story of the excavation of north east tower that revealed the mote and viking settlement and finally the grander of the Viscounts and our now state function rooms. 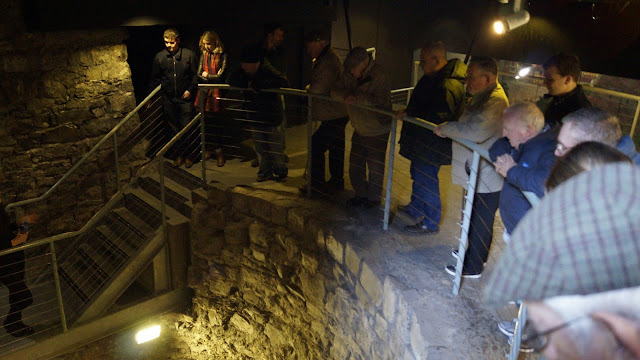 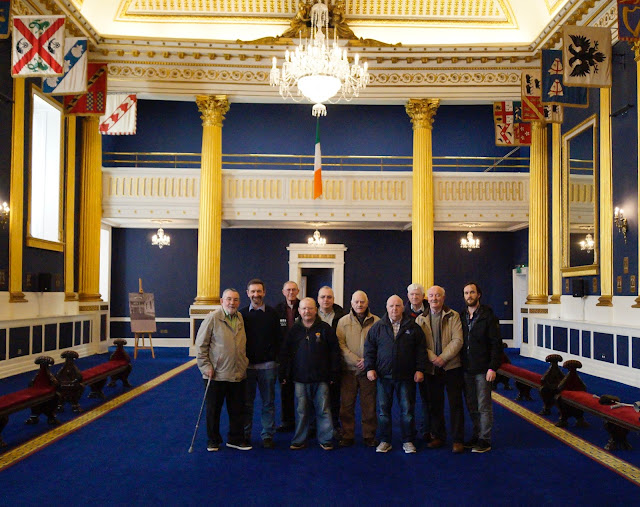 After our tour of the castle we continued on to see the Crawford Collection which was marvellously displayed in the rooms and halls of the castle, some of the men's favourite were the George Mounsey Wheatley Watkinson's Paddle steamer entering the port of Cork 1841 and George Butts 'A view from Audley Place': for there're topography history of the Cork Landscape, Men of the South  by Sean Keating: for it's historical reference to the Irish rebellion,  Danial Mac Donald 'Bowling match at Castlemary Cloyne c.1841': for it's enlightening us on the history of the game which was first introduced to Cork by immigrant weavers from Yorkshire, Barry Cooke's The Lough Derg Pike: for the avid fishermen in out group Anthony Haughey Famine Eviction Scene, Model World, Newtownmountkennedy 1996: for it charming composition, Murdo McLeod's  'Roy Keane 2002' well because Roy's from Cork Like! 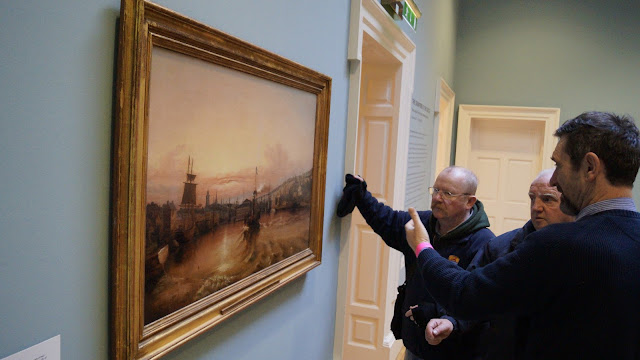 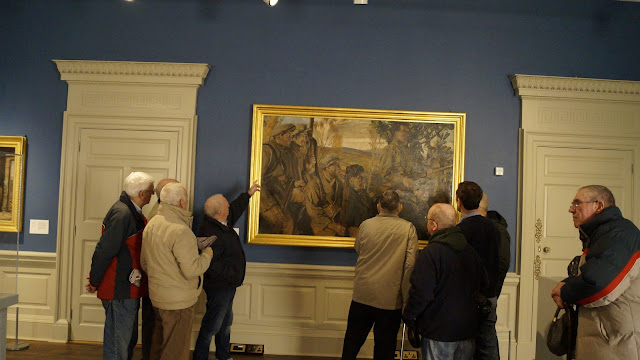 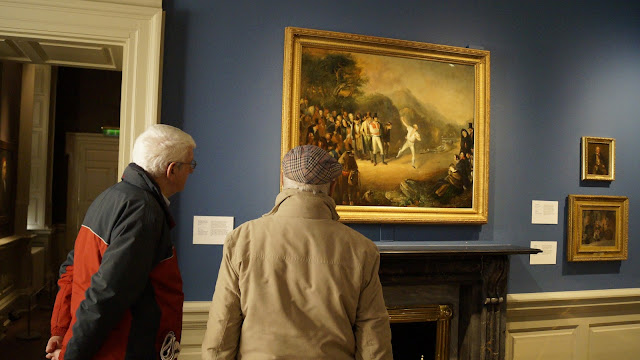 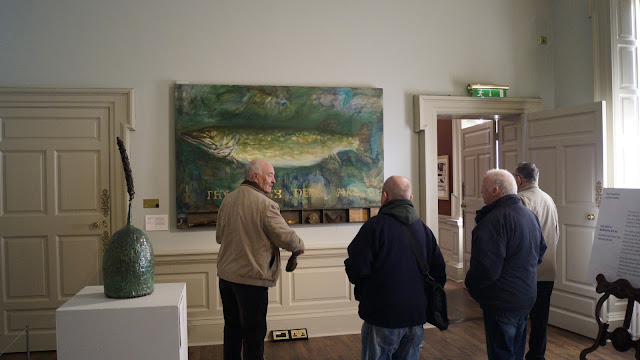 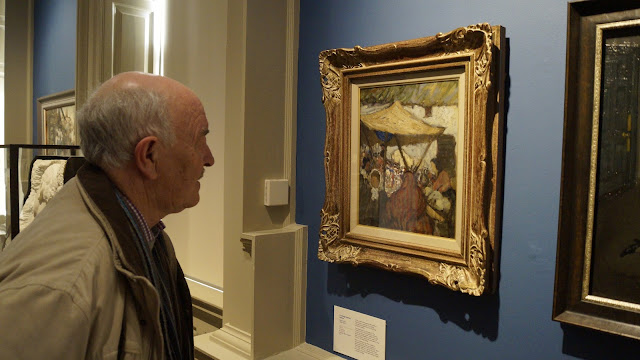 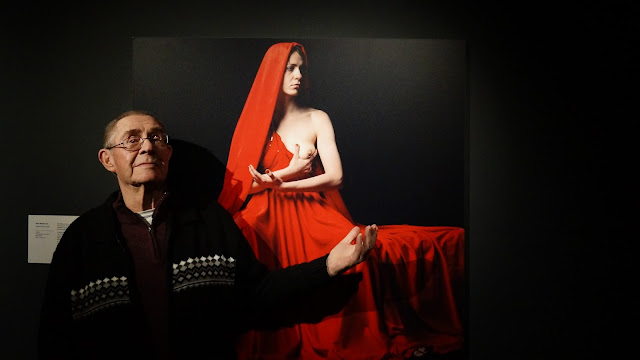 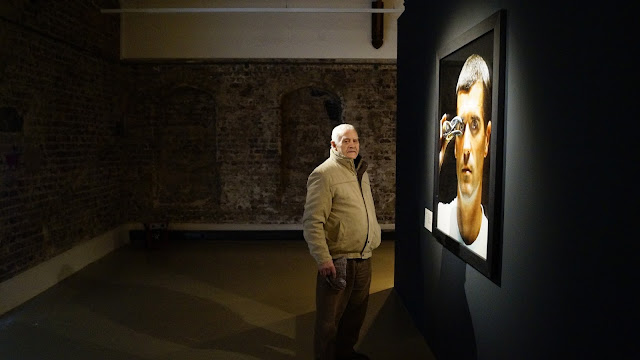 The men were greatly inspired by the exhibition and we hope to take that inspiration back to the classroom to produce our own masterpieces. A big Thanks goes out to All those involved from Cork City Partnership Richard, Mary and John, Anne and Emma from the Crawford education department and Jenny and the staff at Dublin castle. The Exhibition runs till 12 February 2017

Linescapes An introduction into line drawing

The first line drawings that I did in this style go back to when I lived on Hollaway road in 2006. I had been painting shop fronts and had just got a new computer at the time. My flat mate whom I study graphic design with was making a career out of illustration he introduced me to drawing in photoshop and immediatly I started using my street photography that I reference for my painting as my source material. These line drawing were the outcome of that body of work.

Ideas arose from this work which chalanged me to re-interpt forms and invent my own flat perspective using a continuous line as part of the Drawing style as you can see on the illustration 'Ooh la la' but also brought problems which needed creative problem solving including, forshortening and positioning forground objects and people a decopage of photos if you will in which to work my drawings from. The output of work took many forms including Photo etching on copper which gave a beautifully embossed line, printing on canvas and other materials such as silk.

other elements started to apear in this illustration such as reflections of people in windows and the ghost image of people. which add to the sence of passing of time.

Re-production of William Sheehan The Consultation by Fair Hill Men

In 2015 I started teaching a small group of 8 men at the community house in Bride Valley Park Fair Hill. The Fair Hill mens art group meet weekly for an art class and is supported by Cork City Partnership, Springboard and Cork City Council . As part of the groups monthly outings last november we paid a visit to the Lord Mayor counciler Chris O' Leary in his chambers and talked about issues that concerned the men as well as getting a tour of the lord mayors office. The lord mayor told us he had a selection of paintings on loan from the Crawford art gallery which held significance to him and the year that was in it the centenary  of 1916. This gave us the I idea to make or own painting from the Crawford art collection.

So I set about sourcing images that would be appropriate and have references to 1916. I didn't have to look hard as we had already had been making reproductions from the Crawford art collections book Three Centuries of Irish Art (2014) On reading about this painting I was interested about the story from a domestic view which was set around the time of 1916 infact this painting was finished and put on display  by Sheehan in 1917 which although those not reference the rising does highlight social and political divides in Irish life at the time.

The composition included many individual elements including still life and portraiture in which the men could learn from but most intriguing was the time and the story behind the painting. And so began our discovery into this painting

William Sheehan (1894-1923) | The Consultation 1917, oil on canvas, 69 x 80 cm, 294-P, presented by Dr Edmund Murphy
Although this painting does not immediately suggest an obvious theme for THE 1916 TRAIL, it was painted in Ireland during the First World War and provides the viewer with a wider context for the Irish Revolutionary Period (1912-23).
William Sheehan was a student of both the Crawford School of Art and the Dublin Metropolitan School of Art during the Irish Revolutionary Period. A character in The Last
September (1929), Elizabeth Bowen’s novel set in Ireland in 1920, notes the apparent nationalism of the Dublin school Sheehan attended, reflecting that “there might be high explosives inside all the casts with capacious figures.” Although Seán Keating (1889-1977) had also been a student there and would later paint overt nationalist themes, in this painting Sheehan does not present the viewer with a nationalist subject, but instead offers a reflection on the domestic effects of war.
Painted when the artist was aged just 23, The Consultation (1917) depicts the Cork actress Caroline O’Connor seated at a table in her family home in the suburb of Ballintemple. At the opposite end of the table is a man, seen reflected in the large mirror, ominously bearing a letter. This represents the moment when Caroline, eldest daughter and parental figure to her siblings, received the news of the death of two of her brothers who had served in the British army and were both killed in 1917.
Sheehan, a friend of the O’Connor family and later recipient of the Crawford’s Gibson Scholarship, here artfully handles the emotional tension and trepidation experienced by his subject in this moment. His use of the mirror and still life further highlights the suspension of her senses and paralysis of feeling. The painting represents the impact of war on the home and on those anxiously awaiting the next letter. In the year after the Easter Rising (1916), it also demonstrates that Ireland itself was in a suspended existence between British colony and independent nation.
To find out more, see Peter Murray’s essay on this painting in Three Centuries of Irish Art (2014) which is available at the gallery bookshop.


The process
To reproduce a painting like this can be daunting to an amateur painter however as a group
we made a combined effort with a few techniques incorporated by myself. I contacted the crawford and they kindly obliged me a high resolution jpg of the painting from which to work from. I made 2 copys of the painting gridded those up, then set about stretching a canvas to size and girding it up accordingly. I then proceeded to make the cartoon of the image from the gridded up prints.The second copy of the print was then cut up along the grid lines into 48 squares 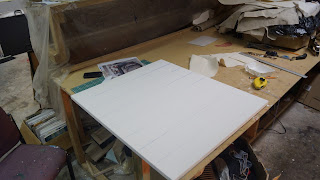 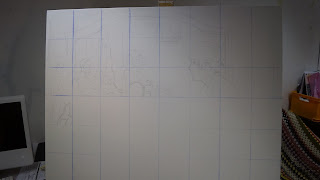 Over the period of 7 weeks the men left there own paintings to copy a small section of the painting. With little lessons in colour mixing. 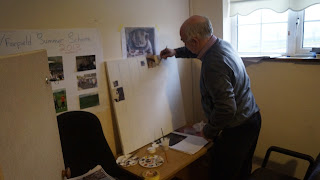 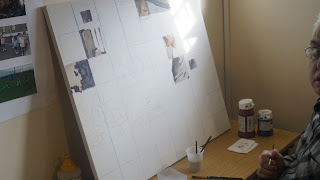 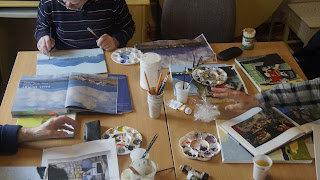 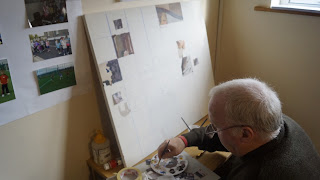 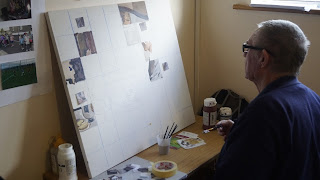 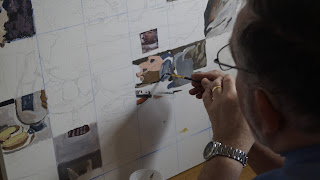 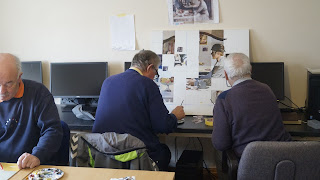 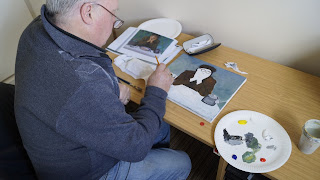 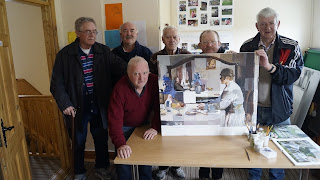 After 7 weeks we almost had it finished with one square left for their teacher to complete.
During the course of the painting. I had arranged for the men to pay a visit to The Crawford Art Gallery to view the picture and Ann Boudart curator arranged  for the painting to be taken out of storage and displayed in the Drawing room. On our visit we brought along our version and put the two painting side by side we were told of the story of the painting. This was a trump for us to see the two paintings together.we were then taken on a tour of the gallery and finish in the Crawford Cafe with tea and cake. 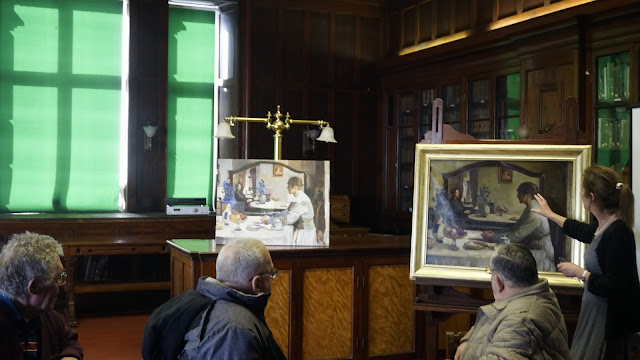 Exhibition at Bolts a new gallery in Cork 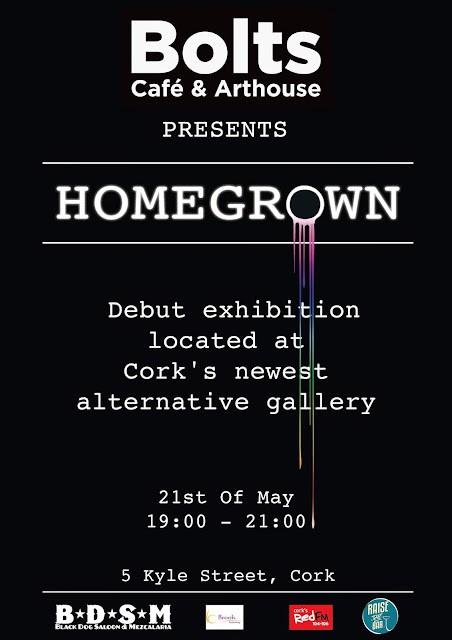 This a painting from a series I did with images taken from Gumtree whilst looking for a flat in London. (2008)
Posted by Paul Mc Kenna No comments:

I been asked by Hugh Gillian friend and fellow artist and Gina Strumpf my American artist and fellow Golden Acrylics Educator to post some of my art work over the next 5 days.
Day#1: Here is an old piece from my London series  a view from my flat in Lower Clapton road 2007